Have you ever hear of Pigs flying?
In English, the phrase 'when pigs fly' refers to something so impossible, that it is like pigs flying: e.g You will get my agreement  on this subject when pigs fly.

Just suppose that you have been caught red handed  and are very embarrassed , and do not know what to say to the person who caught you, he/she could ask you "The cat got your tongue?"  which means " Are you unable to reply because a cat ate up your tongue?"

Of course, like all idioms, this is not at all likely , in case your imagination is running riot with bizarre mental images.

Bye for now!
Posted by Rakesh Krishnan at 06:37 No comments:

What's a Gerund? Simply put, it is a present participle used as a noun. Some experts even call it a verbal noun.
Like a noun, it can be used as a subject.

Smoking is bad for your health.

It can also be used as an object.

It can be used as a complement after a linking verb.

It can be used as an adjective.

This is the living room.

It can also be the object of a preposition.

Do not eat heavily before swimming.

Posted by Rakesh Krishnan at 06:24 No comments:

Let's get this show on the road!

This sentence is a classic example of and 'Idiom'. Okay, so what is an "idiom'? In simple  English, it is a group of words that are used in a particular way, or an established usage, and it means something that everyone knows because it has been used so often.

In this case, it means, "let's get this project started!". When you say this to your friends, it means that you want to start up something now, that you have been planning for a while, say a picnic or a vacation, etc.
Posted by Rakesh Krishnan at 06:38 No comments:

There is considerable confusion in the use of these two words in English today. The word 'affect' is a verb, and it means "to influence or make a change to" something. The word 'effect' is a result of an action.
Let me illustrate this with examples of the correct usage of the two words:

The new tax policy will not affect you in anyway.

The effect of Pollution will be borne by the next generation.

Posted by Rakesh Krishnan at 05:54 No comments:

Collocations of verbs and prepositions

Collocations of verbs and prepositions

One of the funny quirks of the English language is to get used to which verbs are used with which prepositions. There are no rules which define these, you get used to them as you use the language more often. This is called a collocation, and it is one of many in the language.
Take for example the preposition 'against'; it is commonly used with the following verbs:
guard, rebel, lean, offend, war.
So one would guard against gluttony!
The soldiers rebelled against the Duke.
The jury leant against the arguments of the defence lawyer.

Some common collocations are shown below, this is not mine but comes from a page called www.pictaram.com, and as I make no profit from this blog, I show it below for the reader's convenience. 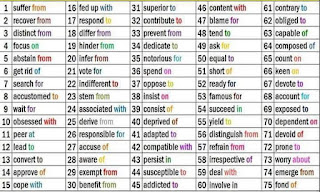 Posted by Rakesh Krishnan at 12:48 No comments:

Many people wonder when they must use any one of these options? The former is the subjective form of the pronoun and the latter the objective form. If you are in this quandary, a way to determine which one to use is to ask yourself the question: Can he, she or they be substituted for a pronoun in context? If the answer is yes then you must use who, for example,

Posted by Rakesh Krishnan at 15:56 No comments:

Getting your sentences right!
In every language, there is an order in which you make a sentence. With English, you start with the subject, whatever you are talking about, then place the action word, the verb, and hey presto- you have a sentence!e.g  He sings.  Okay, if you like his voice, you can add and adverb 'beautifully'  and you get 'He sings beautifully'. Now, as an author, if you're feeling romantic, you can add an object to the sentence- 'He sings beautifully to his fiancee'. Aha! That was an addition of 3 words - 'to', 'his' and 'fiancee'! The 'fiancee' is the object of his song, 'to' is the preposition and since he is singing to the woman who is engaged to him, it is 'his' fiancee- the possessive pronoun- not somebody else's fiancee - in which case he is likely to end up with a black eye for his efforts!!😀