The history of the English language

The United Kingdom or Britain , as we know it today, was conquered , either partially or fully by peoples from several  regions. Initially inhabited by the Celts , who lived in many areas including France, Spain and almost all of Europe excluding Scandinavia , it was later invaded by 3 Germanic tribes, the Angles (yes, there were people who were actually called that) the Jutes (not the plant!) and the Saxons.
They were followed by other invasions, from the Romans, the Vikings  and finally the French. Hence their language , English has been influenced by the languages of all these peoples, and probably contributed to a culture that was incredibly resilient and flexible.
Small wonder that they eventually built an empire that, for a period of time, had the Sun never setting on it !
The Romans brought along Greek though it may have reached Britain through cultural exchanges even before that.
Here is an interesting link to some information about the English language
http://www.johnchaple.co.uk/language.html

Posted by Rakesh Krishnan at 10:18 No comments: 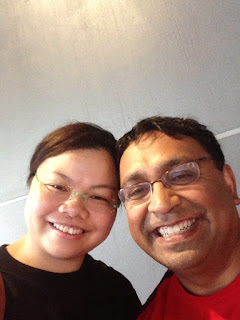 The idea for this channel started a little before 15th August 2013, when I reached Hong Kong from New Zealand. I didn't see why there would be a need for me to teach English in a place that had been run by the British for almost 100 years.
When I did arrive, I saw that  the English language was sparingly used by people in the New Territories, a little more commonly used in the Kowloon peninsula, and used very frequently on the commercial centre of the Hong kong island, though understanding of the language is fairly widespread in all these regions.
I started teaching little children the very next day after arriving and have never looked back. My muse and wife, Florence, has helped me understand the people of Hong Kong and their sensitivities wonderfully, and I have loved teaching in Hing kong over these years.
We will try to teach in an interesting natural manner so that our students will learn with minimal effort and use technology, to make learning interesting and fun!
Posted by Rakesh Krishnan at 10:44 No comments: